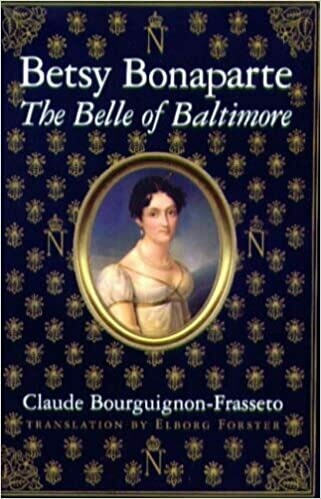 Betsy Bonaparte: The Belle of Baltimore

From the back over:

"Young Elizabeth Patterson, high-spirited daughter of a well-to-do mercantile family of Baltimore, meets the youngest brother of Napoleon, First Consul of France, while out riding, and soon the two meet again at a ball given by the Supreme Court Justice Samuel Chase. Despite intervention by European diplomats, the couple marries in 1803. Betsy is 18 and Jerome Bonaparte - fresh from naval duty in the Caribbean - is 19, six years too young to marry without parental consent under French law.

The young couple is the toast of Baltimore and Washington. The stage, however, is set for trouble. By the time Betsy and Jerome arrive in Europe, Jerome's imperious brother is not merely First Consul but Emperor Napoleon I. The angry emperor refused to recognize their marriage. Yet a child is on the way - the first American Bonaparte.

So begins this chronicle of a remarkable American woman. It is a story of womanly strength and character in a time when independent Americans looked warily at the pomp of Europe, but still were fascinated by it. Betsy inhabited both worlds with grace and wit. For 25 years she lived in Europe, participating in its intellectual and social salons and mingling easily with the leading political and artistic figures of the time. She moved in season from Paris to Geneva to Florence to London, and, at intervals, back to Baltimore. The Bonaparte family, scattered about Europe, embraced her, as did a host o disparate figures from Wellington and Lafayette to Chateaubriand and Victor Hugo. She was courted by many European suitors, but always she remained aloof and alone, forever devoted to the welfare - and the lineage - of her son and grandchildren of the United States."