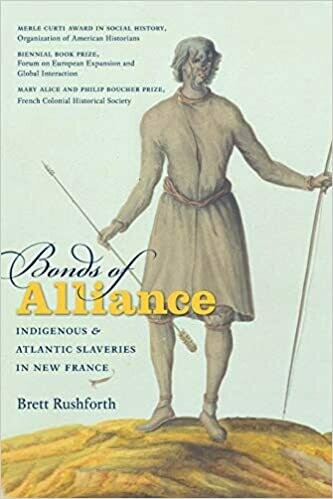 Bonds of Alliance: Indigenous and Atlantic Slaveries in New France

"In the seventeenth and eighteenth centuries, French colonists and their Native allies participated in a slave trade that spanned half of North America, carrying thousands of Native Americans into bondage in the Great Lakes, Canada and the Caribbean. In Bonds of Alliance, Brett Rushforth reveals the dynamics of this system from its origins to the end of French colonial rule. Balancing a vast geographic and chronological scope with careful attention to the lives of enslaved individuals, this book gives voice to those who lived through the ordeal of slavery and, along the way, shaped French and Native societies.

Rather than telling a simple story of colonial domination and Native victimization, Rushforth argues that Indian slavery in New France emerged as the nexus of two very different forms of slavery: one indigenous to North America and the other rooted in the Atlantic world. The alliances that bound French and Natives together forced a century-long negotiation over the nature of slavery and its place in early American society. Neither fully Indian nor entirely French, slavery in New France drew upon and transformed indigenous and Atlantic cultures in complex and surprising ways.

Based on thousands of French and Algonquian-language manuscripts archived in Canada, France, the United States, and the Caribbean, Bonds of Alliance bridges the divide between continental and Atlantic approaches to early American history. By discovering unexpected connections between distant peoples and places, Rushforth sheds new light on a wide range of subjects, including intercultural diplomacy, colonial law, gender and sexuality, and the history of race."