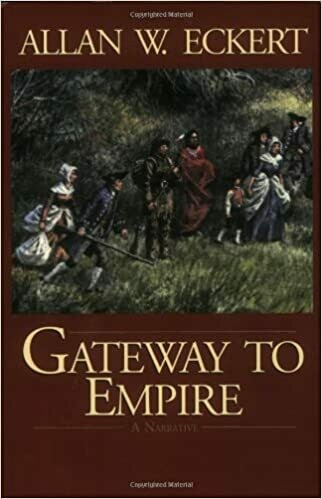 "In Gateway to Empire, the fifth volume in the acclaimed series The Winning of America, Allan W. Eckert continues to recreate the relentless and tragic wresting of the North American continent from the Indians.

As in The Frontiersmen, Wilderness Empire, The Conquerors, and The Wilderness War, this volume is irrefutable history made excitingly immediate through the lives of memorable individuals. The story traces the settling of the Illinois region from 1763 to 1816 and focuses on the "gateway to empire" - the Chicago Portage, a vital link between the East and the untapped riches of the West.

When Pontiac, Chief of the Ottawas, was murdered in 1769, his tribe, as well as the Potawatomi and others, swept into the territory of the Illinois Confederacy, virtually eradicated its members, and claimed the land for themselves. These Indians in turn faced encroachment, first from the British, then even more forcibly from the Americans. In exchange for relative peace, liquor, and trade goods, more and more Indian chiefs signed away their land. But one Indian looked ahead and saw that his people would have no land at all unless they banded together to stop the white man. Tecumseh, a Shawnee of unparalleled wisdom with a gift for prophecy, began to build his dream of a united Indian nation. A devastating treachery would undermine the plan at the last moment, and the Indians would have no choice but to fight alongside the British against the Americans in the War of 1812.

At the war's outset, John Kinzie was a highly successful trader at Chicago, where he had established his post eight years earlier. What enabled him to survive this harsh environment - apart from his passion for new frontiers and for the stunning Eleanor McKillip - was the mutual respect and affection he shard with the Indians. Although Kinzie was an American and therefore an enemy in the War of 1812, not one Indian in any tribe would raise a weapon against him.

Around these two pivotal and completely factual characters a rich and highly readable story unfolds."