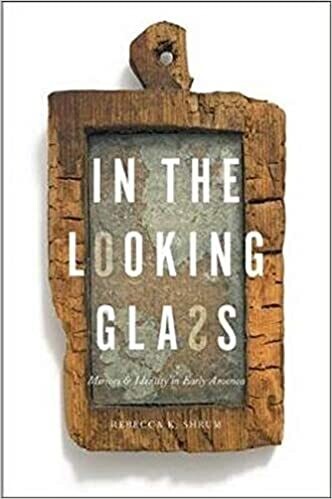 In the Looking Glass: Mirrors and Identity in Early America

"How mirrors shaped human identity in North America from the earliest European explorations.

What did it mean, Rebecca K. Shrum asks, for people―long-accustomed to associating reflective surfaces with ritual and magic―to became as familiar with how they looked as they were with the appearance of other people? Fragmentary histories tantalize us with how early Americans―people of Native, European, and African descent―interacted with mirrors.

Shrum argues that mirrors became objects through which white men asserted their claims to modernity, emphasizing mirrors as fulcrums of truth that enabled them to know and master themselves and their world. In claiming that mirrors revealed and substantiated their own enlightenment and rationality, white men sought to differentiate how they used mirrors from not only white women but also from Native Americans and African Americans, who had long claimed ownership of and the right to determine the meaning of mirrors for themselves. Mirrors thus played an important role in the construction of early American racial and gender hierarchies.

Drawing from archival research, as well as archaeological studies, probate inventories, trade records, and visual sources, Shrum also assesses extant mirrors in museum collections through a material culture lens. Focusing on how mirrors were acquired in America and by whom, as well as the profound influence mirrors had, both individually and collectively, on the groups that embraced them, In the Looking Glass is a piece of innovative textual and visual scholarship."