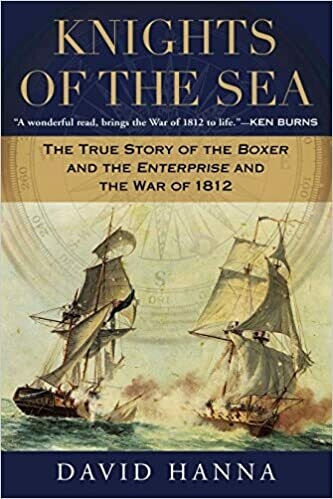 Knights of the Sea: The True Story of the Boxer and the Enterprise and the War of 1812

"On a September day in 1813, as citizens watched from the rocky shore of Pemaquid, Maine, two maritime warriors faced each other in a battle that would become emblematic of a soon-to-be vanished age.

Samuel Blyth was the youthful commander of His Britannic Majesty's brig Boxer, and William Burrows, younger still, commanded the USS Enterprise. Both men valued honor above all, and on this day, their commitment would be put to the ultimate test.

Though it lasted less than one hour, the fight bet3ween the Boxer and Enterprise was a brutal contest whose outcome was uncertain. When the cannon smoke cleared, good men had been lost, and the U.S. Navy's role had changed.

In Knights of the Sea, David Hanna brings to life a lost era, paying tribute to the young commanders who considered it the highest honor to harness the wind to meet their foes and who would be immortalized by Henry Wadsworth Longfellow. The only major sea battle of the War of 1812 witnessed by landsmen, the fight between the Boxer and the Enterprise came to represent not only a military turning point, but a maritime era that would soon be gone forever."