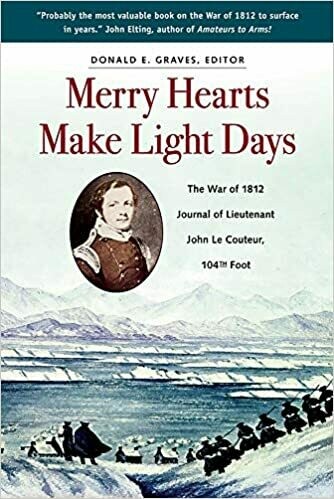 "In June 1812, John Le Couteur, a seventeen-year-old British officer, arrived in Halifax, Nova Scotia, to learn that war had broken out between the United States and Great Britain. For the next three years he campaigned from Halifax to Buffalo, and he left this entertaining memoir of his experiences of storm-tossed voyages, battles on land an sea, the perils of courtship, Canadian high and low society - and the occasional ghost story - played out against the splendid landscapes of North America.

Though young by today's standards, Le Couteur was a brave and capable officer respected by the men he commanded, not least because he detested the punishment by flogging common in the army of his time. Off duty, he was a sociable young man who enjoyed a good prank, was a popular guest at parties and fell in love with almost every pretty girl he met.

He describes the epic fifty-day overland march he and his regiment made from New Brunswick to Upper Canada in the dead of winter. When the news arrived in 1814 that the was was over, he and his fellow officers entertained their American counterparts to dinner, and later Le Counteur travelled through New York on his way home, recording his memorable impressions of his trip down the Hudson Valley.

A man of the Regency period (a time of public manners and private passions), Le Couneur recounts his true adventures with drama and humour in an easy style that reads more like a navel than a historical memoir. Not only do many recent books on the War of 1812 quote his colourful journal, but Johnny himself appeared as a major character in the recent PBS television documentary on "The War of 1812."