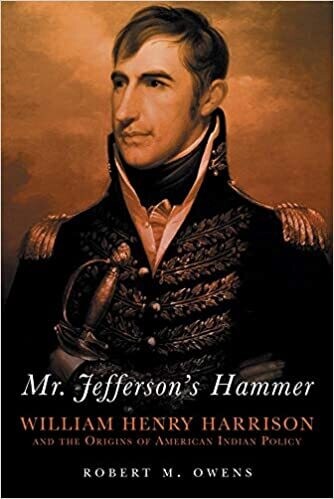 "Often remembered as the president who died shortly after taking office, William Henry Harrison remains misunderstood by most Americans. Before becoming the ninth president of the United States in 1841, Harrison was instrumental in shaping the early years of westward expansion. Robert M. Owens now explores that era through the lens of Harrison’s career, providing a new synthesis of his role in the political development of Indiana Territory and in shaping Indian policy in the Old Northwest.

Owens traces Harrison’s political career as secretary of the Northwest Territory, territorial delegate to Congress, and governor of Indiana Territory, as well as his military leadership and involvement with Indian relations. Thomas Jefferson, who was president during the first decade of the nineteenth century, found in Harrison the ideal agent to carry out his administration’s ruthless campaign to extinguish Indian land titles.

More than a study of the man, Mr. Jefferson’s Hammer is a cultural biography of his fellow settlers, telling how this first generation of post-Revolutionary Americans realized their vision of progress and expansionism. It surveys the military, political, and social world of the early Ohio Valley and shows that Harrison’s attitudes and behavior reflected his Virginia background and its eighteenth-century notions as much as his frontier milieu.

To this day, we live with the echoes of Harrison’s proclamations, the boundaries set by his treaties, and the ramifications of his actions. Mr. Jefferson’s Hammer offers a much needed reappraisal of Harrison’s impact on the nation’s development and key lessons for understanding American sentiments in the early republic."