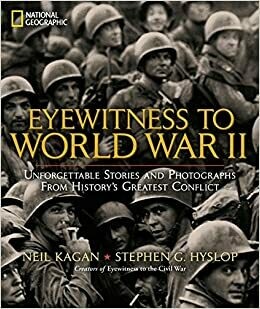 "Uncommon valor was a common virtue," said Adm. Chester Nimitz in tribute t the U.S. Marines who took Iwo Jima. Much the same could be said of the many American and Allied soldiers who risked their lives on the other battlefields in history's greatest conflict - a supreme struggle between the urge to dominate and the will to be free. National Geographic's Eyewitness to World War II tells the story of those who fought that fight in their own words, drawing on diaries, letters, memoirs, and oral histories to offer a compelling, personal narrative of their epic struggle, illustrated with hundreds of revealing photographs, artifacts, and maps.

- At Pearl Harbor Machinist's Mare George Phraner was trapped in the darkness five decks below the surface of the burning battleship U.S.S. Arizona. Barely able to breathe amid the smoke and fire, he confronted death with uncommon composure: "I could feel myself losing the battle to save my own life. I hung to the ladder, feeling good. I felt it was alright for me to let go."

- On D-Day, Sgt. Bob Slaughter was part of the largest amphibious invasion in history. Landing at Omaha Beach, he and other Americans faced an ordeal that would haunt those who survived for the rest of their days. "There were dead men floating in the water," he recalled, "and live men acting dead, letting the tide take them in."

Eyewitness to World War II combines gripping testimony from those who experienced the war with memorable photographs that convey the emotional impact of the conflict on soldiers and civilians - the anxious looks of young men about to go into battle for the first time, the silent cry of an abandoned baby in a bombed-out railway station, the unforgettable face of a frightened 14-year-old concentration camp prisoner pictured shortly before her death at the hands of the Nazis.

Meticulously researched and packed with riveting stories and images, National Geographic's Eyewitness to World War II brings this epic conflict to life and stands as a tribute to those who waged and won the most significant armed struggle of all time."