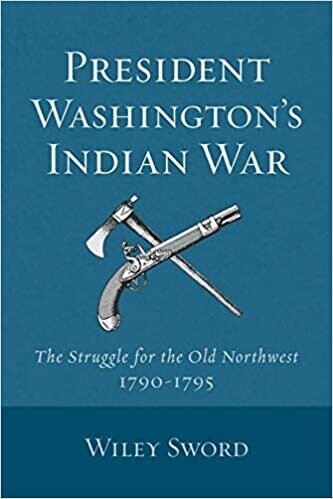 President Washington’s Indian Wars: The Struggle for the Old Northwest 1790-1795

"Military history buffs and scholars will revel in Wiley Sword's exciting narrative, the first comprehensive history of the United States-Indian war of 1790-1795. The struggle for the Old Northwest Territory (modern-day Ohio, Illinois, Indiana, Wisconsin, and Michigan) was as vicious and bitter a conflict as any war in our history. Indeed, the very survival of the new nation was in doubt.

The years from 1790 to 1795 may have been the turning point in Indian white relations on the North American continent. At this time the Indians of the Ohio country-tribes such as the Miamis, the Shawnees, and the Ottawas-engaged in a last-ditch effort to stop the settlers who were moving west into the "Black Forest" wilderness of mid America. They were aided by British agents, based in Detroit, who manipulated the Indian confederacy in an attempt to recoup some of their losses from the Revolutionary War.

Josiah Harmar and Arthur St. Clair led early disastrous campaigns, including possibly the worst defeat of a United States army at the hands of Indians. Ultimately, President George Washington assigned "Mad Anthony" Wayne to rebuild and expand the army, despite considerable domestic opposition. This is the most detailed history yet published of the battles and skirmishes, the futile treaty negotiations with the Indians, and the tribes' intrigues among themselves and with the British, leading to Wayne's final victory 'over the Indian confederacy at Fallen Timbers.

Most impressive is the extent and depth of the author's research in primary and secondary sources. With extraordinary vividness Sword recounts the battles and the life in the American and Indian encampments, quoting from diaries, letters, and statements by American officers and soldiers as well as the accounts of their enemies, such as Little Turtle of the Miamis, Blue Jacket of the Shawnees, and Joseph Brant of the Iroquois. Nor does Sword neglect the activities and life-ways of Britain's traders, agents, and haughty commandants."