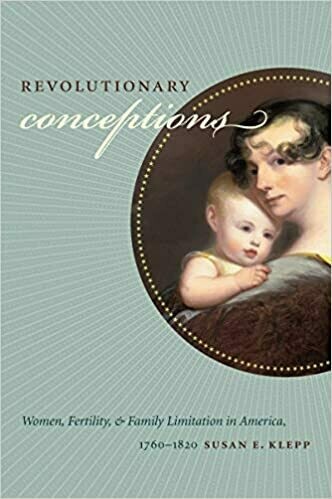 "In the Age of Revolution, how did American women conceive their lives and their marital obligations? By examining the attitudes and behaviors surrounding the contentious issues of family, contraception, abortion, sexuality, beauty, and identity, Susan E. Klepp demonstrates that many women - rural and urban, free and enslaved - began to radically redefine motherhood. They asserted, or attempted to assert, control over their bodies, their marriages, and their daughters' opportunities.

Late eighteenth-century American women were among the first in the world to disavow the continual childbearing and large families that had long been considered ideal. Liberty, equality, and heartfelt religion led to new conceptions of virtuous, rational womanhood and responsible parenthood. These changes can be seen in falling birthrates, in advice to friends an kin, in portraits, and in a gradual, even reluctant, shift in men's opinions. Revolutionary-era women redefined femininity, fertility, family, and their futures by limiting births. Women might not have won the vote in the new Republic, they might not have gained formal rights in other spheres, but Klepp argues, there was a women's revolution nonetheless."