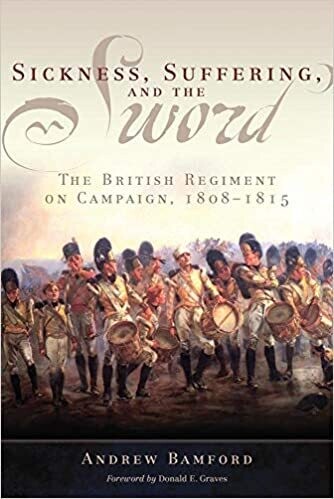 Sickness, Suffering and the Sword: The British Regiment on Campaign, 1808-1815

"Although an army’s success is often measured in battle outcomes, its victories depend on strengths that may be less obvious on the field. In Sickness, Suffering, and the Sword, military historian Andrew Bamford assesses the effectiveness of the British Army in sustained campaigning during the Napoleonic Wars. In the process, he offers a fresh and controversial look at Britain’s military system, showing that success or failure on campaign rested on the day-to-day experiences of regimental units rather than the army as a whole.

Bamford draws his title from the words of Captain Moyle Sherer, who during the winter of 1816–1817 wrote an account of his service during the Peninsular War: “My regiment has never been very roughly handled in the field. . . But, alas! What between sickness, suffering, and the sword, few, very few of those men are now in existence.” Bamford argues that those daily scourges of such often-ignored factors as noncombat deaths and equine strength and losses determined outcomes on the battlefield.

In the nineteenth century, the British Army was a collection of regiments rather than a single unified body, and the regimental system bore the responsibility of supplying manpower on that field. Between 1808 and 1815, when Britain was fighting a global conflict far greater than its military capabilities, the system nearly collapsed. Only a few advantages narrowly outweighed the army’s increasing inability to meet manpower requirements. This book examines those critical dynamics in Britain’s major early-nineteenth-century campaigns: the Peninsular War (1808–1814), the Walcheren Expedition (1809), the American War (1812–1815), and the growing commitments in northern Europe from 1813 on.

Drawn from primary documents, Bamford’s statistical analysis compares the vast disparities between regiments and different theatres of war and complements recent studies of health and sickness in the British Army."