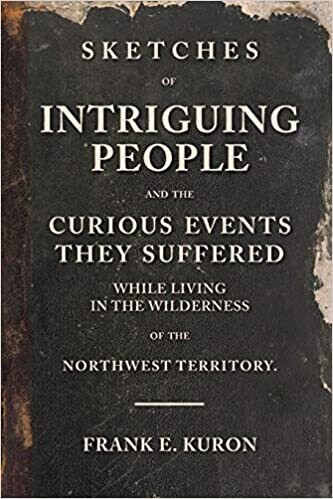 "In 1787 the Northwest Territory was opened for settlement. It was as exciting a time as one could imagine, and volatile as well. With great anticipation, as well as extraordinary courage and resolve, citizens of the new United States ventured from the civilized communities established along the Atlantic, into the expansive wilderness lying beyond the Appalachians. These individuals were in possession of an indomitable spirit that had gotten them through a revolution and now guided them into the unknown; an inherent American spirit that is still recognizable today. Likewise, the Native Americans who already inhabited the land, were instinctively driven to defend it and in the process faced internal struggles of their own.

This book blows the dust off of their stories; most long forgotten and some rarely ever told. Through sketches, created with words rather than charcoal, intriguing episodes of their lives are retold, often in their own words. As you read excerpts from diaries, letters, and newspapers of the day, you'll be given a rare and raw glimpse into some of the most daring lives lived on the frontier. Be careful, for their emotions may momentarily become yours.

Some of the tales are thrilling, others curious, and a few are even light-hearted, but all are true. So come on! The United States of America has just been born! Hazard a trip over the mountains and stake your claim to adventure alongside some rugged, historic, and often heroic Americans, new and native."