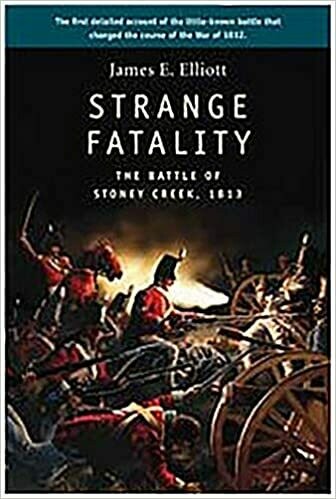 "On a spring morning in 1813 the largest amphibious force in American history to that point - nearly 6,000 troops aboard 140 vessels - stormed ashore near the mouth of the Niagara River, routed the British garrison and captured Fort George. It was a textbook operation, the second consecutive American victory, and a promising sign that events of 1813 would redress the military calamities of 1812.

The badly mauled British army, short of provisions and ammunition, reeled westward, its leadership uncertain where or how the retreat would end. The American forces were poised to deliver the critical body blow the War Hawks in Congress dreamed of when they predicted a four-week war to seize Britain's remaining colonies. The fate of Upper Canada hung in the balance.

Ten days later, in a field near the hamlet of Stoney Creek, the promise of that triumph was smashed in a terrifying night action the outcome of which hinged on a single bayonet charge that carried the American artillery and decapitated the invading army. Little known or appreciated, Stoney Creek was one of the most decisive reversals of military fortune in the War of 1812 and in no small measure determined the fate of the colony that would become Ontario.

Journalist and author James Elliot has compellingly reconstructed the chain of events. From the rise to brigadier general of Maine blacksmith John Chandler, to the Highland heroics of Alexander Fraser, Strange Fatality explores the dynamics of a battle that stemmed the tide of invasion, cost two general their freedom and unseated the highest-ranking soldier in the American army."