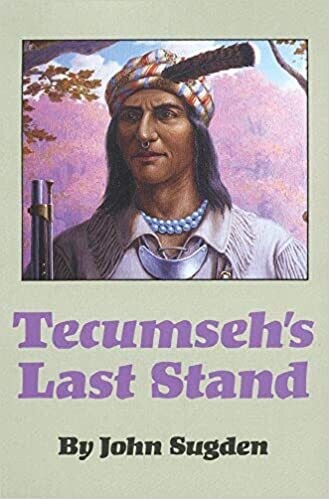 "The War of 1812 has been regarded by many historians as a "small naval war" of little importance. Not so to the Indian tribes of the Old Northwest, who joined the British attempt to hold off the expansionist American armies in a desperate effort to retain their tribal lands, promised to them by the British in return for their alliance. The Indian force numbered some sixteen hundred warriors-Shawnees, Winnebagoes, Kickapoos, Potawatomis, Sacs, Ottawas, Muncey Delawares, Ojibwas, and Senecas among them.

In September and October of 1813, after holding the frontier against the United States for more than a year, a small force of British and Indians under General Henry Procter and the Shawnee chief Tecumseh was driven from Amherstburg after the Battle of Lake Erie. They retreated to the River Thames. The succeeding engagement at Moraviantown, on October 5, 1813, was the most decisive American victory won on British soil in this war. The death of Tecumseh, who was killed while valiantly defending the field after the British had fled, cost the British-Indian alliance its most effective leader.

The story of the campaign has never been fully told from the point of view of the Indians and the British, but innumerable legends have persisted about it, many of them contrasting the courage of the Shawnee chief with the alleged cowardice of Procter. In attempting to dispel the myths, John Sugden searched for surviving records in Britain, Canada, and the United States. He found a major source of information in the little-known minutes of General Procter's court-martial, filed in the Public Record Office at Kew, England.

From this and many other sources, both published and unpublished, the author has comprehensively reconstructed the retreat and tackled the major questions: why was Procter compelled to withdraw from Amherstburg after the loss of his squadron on Lake Erie; why and how did Procter and Tecumseh fight at Moraviantown; how was Tecumseh killed; and how did the engagement affect the fortunes of the British, the Indians, and the Americans in the remaining months of the war.

Sugden further enhances our knowledge about the great Chief Tecumseh in the definitive account of the circumstances surrounding his death."