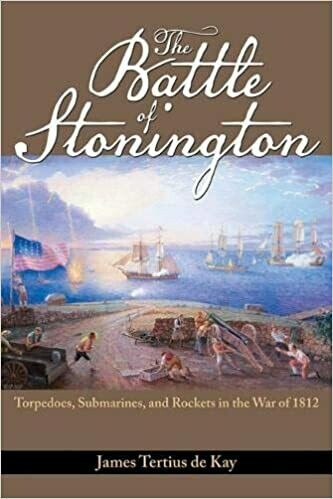 The Battle of Stonington: Torpedoes, Submarines and Rockets in the War of 1812

"In the summer of 1814 a squadron of Royal Navy ships attacked the tiny Connecticut seaport of Stonington and declared its intention of destroying the town. Over the next four days the British barraged the nearly defenseless civilian population with some fifty tons of explosives before mysteriously upping anchor and sailing away, leaving Stonington largely intact.

While a mere footnote in America's early naval history, the Battle of Stonington has remained a source of curiosity for two hundred years. Why did the British single out Stonington and then fail so miserably at their goal? to solve the mystery of this curious battle and to explain Britain's failure to level the town, the author takes the reader back some forty years earlier, to the American Revolution, to unfold a surprisingly complex set of circumstances involving people on both sides of the Atlantic and across America. Drawing on contemporary news accounts, secret Royal Navy correspondence, and other primary sources, he investigates events leading up to the puzzling attack and then recounts the exciting details of the battle itself. It is a memorable, masterly told story of brave and honorable people, divided by loyalties, and new ideas fighting traditional, old-world values.

As the book develops, de Kay introduces a fascinating cast of characters that ranks with the best of fiction: Thomas Hardy, the hero of Trafalger who led the British attack; Jeremiah Holmes, an American merchant captain who led the defense of Stonington; Stephen Decatur and Robert Fulton, two well-known American patriots; and a number of enterprising smugglers and spies. At the same time, tribute is paid to the significant roles played by new naval weapons - American submarine vessels and torpedoes, British rockets and bombs - the revolutionized the art of war.

The Battle of Stonington brings all of these elements into brilliant focus to provide a lively narrative history not just of the events at Stonington, but of the entire period. It is a compelling, often humerous story."