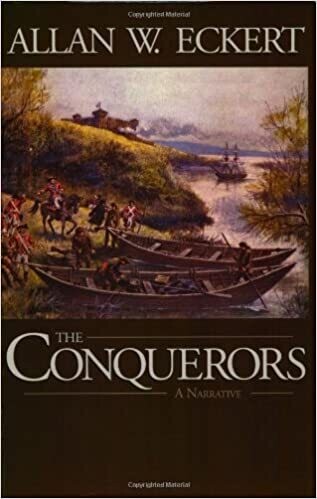 "The Conquerors, the third volume in Allan Eckert's acclaimed series, The Winning of America, continues the narrative of The Frontiersmen and Wilderness Empire: the violent and monumental story of the wresting of the North American continent from the Indians. But the locale has moved westward to the northern frontiers of Pennsylvania, to Michigan and the Green Bay area, especially the crucial outposts of Fort Pitt and Fort Detroit, Sandusky and Mackinac.

Wilderness Empire concluded with the English victory in the French and Indian War, a conquest which gave them possession of an immense North American empire. Now English soldiers and traders began the trek across the wilderness to man the former French outposts, to secure the land for the Crown and to exploit its riches. But these men were to find that the conquest of the Northwest did not end with the defeat of the French. The Indians had only resentment for the English, whom they regarded not as conquerors, but as unwelcome interlopers on their own ancestral lands. At last, provoked beyond endurance by restrictive policies, and encouraged by agents of the French, the most powerful tribes of the region united behind the charismatic Pontiac, war chief of the Ottawa, in a concerted effort to drive the English forever form the Northwest.

The Conquerors is the story of Pontiac's uprising and the men involved in it: the conquering English, both soldiers and intrepid civilians, who undertook the dangers of the Indian trade for profit and the adventure of opening a new land; and, most importantly, the Indians, who refused to accept the yoke of the conquered and were driven to violence to protect their homes and their way of life from the encroachment of an alien civilization.

Combining the accuracy of a chronicle and the spellbinding pace of a story well told, Allan Eckert evokes the high drama of the conquest of the Northwest and the breathtaking grandeur of the land itself."