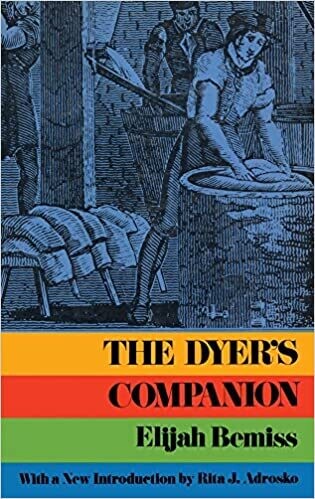 "In 1806, when Bemiss's Dyer's Companion first appeared, the American dyeing industry was beset with problems; Europe was trying to maintain control of the market, and American dyers were often undertrained with recipes selling from master to apprentice "for twenty and thirty dollars each." To remedy this situation, Elijah Bemiss wrote his book. Today Bemiss's work is still important for seeing the exact methods of natural dyeing and understanding the life of the dyer in the early nineteenth century.
This is the complete reprinting of the 1815, greatly expanded, edition. In it the reader can find dye recipes for all shades and varieties of reds, blues, yellows, browns, and blacks divided into dyes for woolens and dyes for linens and cottons, with examples of dyes for both hot and cold dye processes. The early sections give some 119 detailed recipes, the outcome of Bemiss's study and experimentation, and nearly all the dyes the home dyer could want to use. In the second part, the appendix added to the 1815 edition, Bemiss gives more information on setting up vats, on equipment and tools, on the reasons why certain dye materials and methods were chosen, on European methods, and on the differences between the greater and the lesser dyes. A final section gives recipes for inks, dyes for feathers, miracle cures, recipes for beer and mead and other curiosities in the early dyer's repertoire. A new introduction has been written for this Dover edition by Rita J. Adrosko, Curator of the Division of Textiles at the Smithsonian Institution and author of Natural Dyes and Home Drying.
Those who have wanted to use natural dyes will find that after they have learned the essentials, they can use this book to extend their list of useful dyes and colors. The book will also be of interest to all who want to know more about early American craft traditions. It allows you to see the materials, the equipment, and the way of life of one of the most important craftsmen in the early years of the American republic."