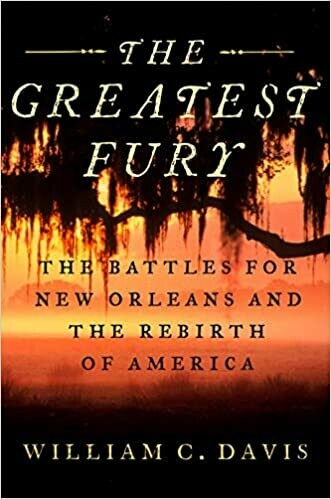 "In the waning days of 1814, a fleet of Royal Navy warships closed in on the waters below New Orleans, the gateway to the Mississippi and America's heartland. The ships were laden with thousands of veteran soldiers, some of whom had defeated Napoleon and set Washington, D.C. ablaze. British warlords were determined to seize the city, thereby tipping the balance of power on the continent forever. The very existence of the United States was in danger.

To repel the invasion came General Andrew Jackson, who found a city with crumbling fortifications and a disorganized militia, as well as a deeply divided population of conflicting loyalties. With only two regiments of his own to begin with, Jackson assembled a motley crew of farmers, merchants, backwoodsmen, smugglers, free blacks, and the enslaved, as well as Choctaw Indians, many of whom were unarmed.

It was a makeshift army, populated with the giants of America's outer edges; Jackson himself, a military legend bearing a saber scar inflicted on him in childhood by a British soldier, now determined to wreak vengeance upon his old enemy; Reuben Kemper, a ferocious frontier fighter who was once captured by Spanish forces, only to pay them back with a bullwhip and a knife; and Jean Laffite, a French privateer who haunted the bayou country, turning away from outlaw to hero to support Jackson's army.

A rousing blend of scholarship and vivid storytelling, The Greatest Fury delves like never before into one of the most consequential battles ever fought on American soil to deliver an astonishing tale of resilience, bravery, and uncommon heroism."