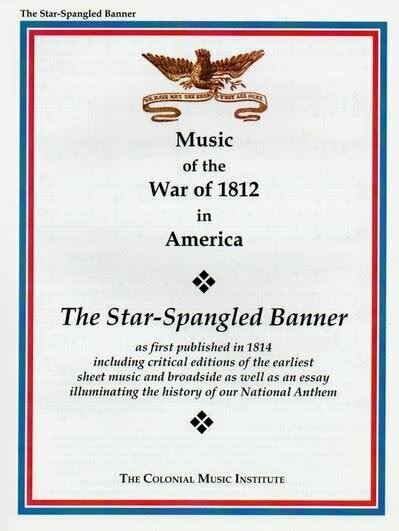 "The Star-Spangled Banner" was written during the Battle of Baltimore, when the British launched a two pronged assault - landing troops at North Point and firing heavily on Fort McHenry from their ships. Francis Scott Key observed the naval bombardment between September 13 and 14, 1814, from aboard ship as a temporary captive of the British. As he watched, Key began to craft new lyrics to a popular English melody and this song took shape.

This critical edition was created from the earliest printings of what would become the national anthem of the United States of America. Key's lyrics were first published as a single broadside the day after he landed, and the first engraved musical setting appeared within a few weeks. The original musical arrangement of Key's new lyrics was made by a composer in Baltimore named Thomas Carr, brother of the printer, Benjamin, who had emigrated from London in 1793. Thee are subtle differences between Thomas Carr's setting and the song as it is sung today, especially in the repeat of the last line as a chorus. The original song, "Anacreon in Heaven," featured this approach and period editions of both songs include the chorus in full four-part harmony. The melodic range of each verse is greater than the choruses, thus the initial practice of singing "The Star-Spangled Banner" was to feature a soloist being answered by a small chorus or indeed all gathered - something we never hear today.

It would be instructive to study this arrangement in conjunction with the many renditions of this anthem today before sports and other public events, In addition, over the years the embellished tale of the creation of the lyrics, that somehow came to be referred to as a poem, also deserves discussion. this publication tells the true story, and our companion publication "The Anacreontic Song: The Original English song upon which 'The Star-Spangled Banner' was based" expands on the earlier history of this world-famous melody."